As 2013 was quickly coming to an end, Mike and I decided we wanted to end the year doing our favorite things: hanging out with T.J., being at home, cooking, watching basketball (Hawkeyes were on TV and Cyclones were on the radio at the same time….perfect!), and….putting together a puzzle?  Well, I  knew the first four things were definitely our favorite things to do, but okay, maybe putting a puzzle together would be added to that list in 2014 🙂  Here is the puzzle we picked.  When I went to Target this was about all they had left.  Evidently, puzzles are the thing to do on New Year’s Eve…who’d of thought? 🙂  I’ll post a pic on my Facebook page when we’re finally done! 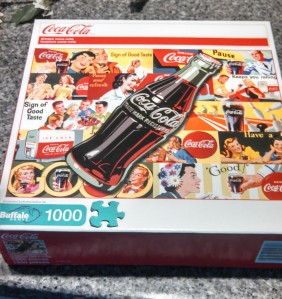 As we came up with our menu, we decided we wanted to experiment with some appetizers that we’ve been wanting to try for sometime.  Something that, if they turned out, would work well for our next dinner party or the next hor d’oeuvre party we hosted.

We are typical Iowans.  We LOVE anything bacon.  Mike had been wanting to try bacon wrapped waterchestnuts and black olives for sometime so we decided that would be one of our menu selections.  I’ve always wanted to try stuffed mushrooms for an appetizer.  I love the way they look…elegant, yet simple to eat and not to mention, they sound delicious.   I already had bacon on my grocery list so decided the mushrooms had to be stuffed with bacon.  Being a big Seinfeld fan, I knew I had to put something healthy into the mushrooms to “even out” the bad of the bacon  so decided on my favorite superfood, spinach.

This appetizer was the perfect choice.  They were delicous and pretty easy to make.  However, I have to say, they did take longer to put together than I anticipated (about 30 minutes) and then still had to bake for 15-20 minutes so I was glad I had started earlier than I thought I needed to.  I think the next time I make them it will go faster because I’ll already know what I’m doing.

**This Recipe will make 12-15 mushrooms.  I would consider about 2 mushrooms a serving size so this would be enough to serve about 6-8 people**

1 Package (16 oz) Fresh Mushrooms (mine ended up having 12 mushrooms, which was perfect but I would have had enough filling to stuff a few more, if I needed)

Remove stems from mushrooms.  I just used my fingers to reach in and pull the stem out of the cap and then tried to hollow out the cap of the mushroom as best I could so there was room to put the filling.  You’ll be surprised how much filling you can put inside each cap, even though it may not look like much room. 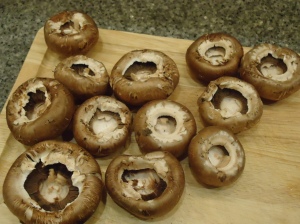 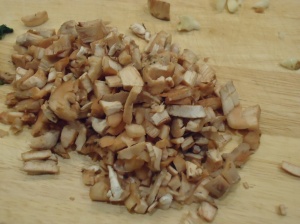 Spray a medium-sized skillet with cooking spray and add spinach.  Cook until spinach begins to wilt (about 2-3 minutes).  Remove from skillet and place on cutting board.  Chop finely and set aside. 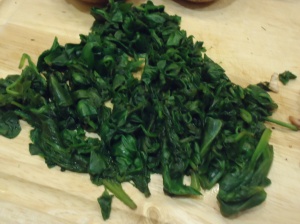 Add Olive Oil to skillet and sautee garlic until golden brown (about 2 min). Add chopped mushroom stems and sautee until soft (about 3 minutes). 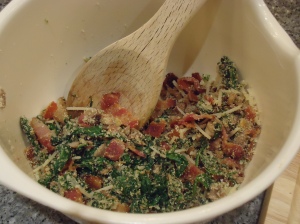 Season mushroom caps with salt.  Stuff wtih spinach and bacon mixture.  I only had 12 mushrooms so I stuffed each mushroom as full as I could and rounded the tops.

Spray a baking pan with cooking spray and place mushrooms on pan.  Bake at 400 degrees for 15-20 minutes or until mushrooms are golden brown.  Enjoy! 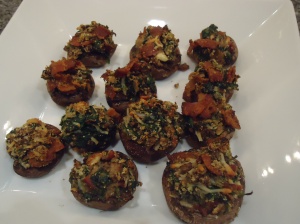 I’m glad to say both of our appetizers were a huge success and were done just in time to listen to the tribute to Johnny Orr (who sadly passed away on December 31st) and watch my Hawkeyes on TV.  Both teams pulled out a win!

And, yes, we did start on the puzzle (which we’re still in the process of putting together), and I have to say, I think I’ve found a new hobby for 2014.  It’s addicting and I LOVE it!  Watch out puzzle world…here I come 🙂