As I’ve talked about a few times before, I try to serve fish in my house at least once a week.  Its heart healthy, low-calorie, has omega-3’s, and is just an overall good for you dish.  There are a few drawbacks when it come so Fish Night. T.J. still refuses to eat it.  At 2 1/2 there are still some textures he’s pretty picky about.  I haven’t tried real hard to make it kid friendly, which may be what I try with my next attempt at fish.  I’m thinking if I put some type of healthy breading on it he may actually enjoy it.  Secondly, Mike is not a big fish fan.  The only fish fillets I’ve been able to get him to eat are mahi-mahi, tilapia, and salmon.  The first time I succeeded in actually getting him to eat salmon, and enjoy it, was when I made Balsamic Glazed Salmon, which is still one of my favorite salmon recipes I’ve made.  This was a huge accomplishment because I had read countless articles on how important it is to incorporate salmon into your diet.

So, long story short, Fish Night is a big deal because I have to really think about how I’m going to prepare the fish and, at this point, I must have another meal lined up for T.J. (hopefully, not for long).

For this week’s Fish Night I was able to try a recipe I’ve been wanting to try for a while.  I would only be making it for myself, so if it was a failure I wouldn’t feel too bad. Mike had eaten late in the afternoon so was not hungry and would be going for a run during suppertime, and I already had figured out what I was going to make T.J.

The dish I tried was Rosemary Dijon Salmon.  I usually love anything with rosemary or Dijon in it so I thought this sounded like a good combo.  The best thing about this meal is it only took about 5-10 min to put together, while tasting and looking like I had spent much longer on it.  It was delicious!

Line a baking dish with aluminum foil.  I do this every time I bake fish or chicken with a sauce or glaze.  It makes cleanup so much easier.  Spray aluminum foil with cooking spray.  Place each fillet skin side down in baking dish.

Brush rosemary Dijon mixture on the tops and sides of each fillet until all of the mixture is gone.

Top each fillet with a slice of lemon.  This is a nice touch, makes a beautiful presentation, and gives you a little extra lemon to squeeze over the fillet when it is served.

Bake for 15-17 minutes.  Fish should be cooked to an internal temperature of 145 degrees.  Many fish “experts” would probably frown upon how well done we get fish at my house.  Both Mike and I like it a lot better when it is cooked longer and dries out a little.  If you don’t like the “slimy” texture that sometimes accompanies fish, try cooking it a little longer and see if you like it better. 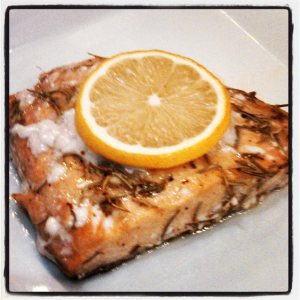 Beautiful!  I was a little sad I was only serving it to myself, it looked so pretty.  I usually try to be uber healthy when I’m eating fish and have veggies on the side, but since it was just me last night I served it with a side of cottage cheese topped with sliced cherry tomatoes, salt, and pepper and a lighter slice of cheese bread.

My tummy was very happy!

Give this recipe a try.  You won’t be disappointed!