As many of you know, Mike and I are big time college sports fans.  Ever since we started dating, our winters have revolved around college basketball.  During the spring, summer, and fall months we spend most of our free time golfing. Watching college basketball takes the place of this during the winter months.  Every Monday we look at the schedule and see what games we want to watch that week and set up our weekly activities around them.  Some might call us a little obsessed 🙂

Here’s where it gets tricky.  Mike is a Cyclone.

And I’m a Hawkeye.

Early on we both agreed we would watch both teams.  So after watching the Cyclones faithfully, through thick and thin (just like with my Hawkeyes), over the past 10 years I’ve gradually become a Cyclone fan.  I’ve come to know their team and their coaches well and enjoy following them in both football and basketball.  However, when they play my Hawkeyes I still root for Black and Gold.

Unfortunately, I can’t say the same for Mike.  He watches the Hawkeyes but has a hard time getting excited about their success.  Like he told me on Sunday after Iowa upset #3 Ohio State, “I have one team…the Cyclones.  The Hawkeyes would be my second favorite team if I had more than one team…but I don’t.”  Yes, it can be frustrating sometimes, but as long as my Hawkeyes do well, I don’t care who is cheering for them 🙂  The fact that both our teams are in the top 25 this year is beyond thrilling in our house.  After watching them during their worst years in the early 2000’s (we are far from fair weather fans), the fact that they both are finally doing so well is something we’ve waited to happen for almost a decade.

As we prepare our weekly schedule for each game, we also plan our “Game Time Menu.”  For me, being the foodie that I am, this is almost as exciting as the game.  My favorite game time meals usually involve appetizers and finger food.  Here is a recipe we tried a few months ago that was a huge hit and one I’ve made several times since – Chicken Pesto Roll-ups.  I usually make these with Basil Pesto, but the last time I went to the grocery store they were all out so I substituted Sun-Dried Tomato Basil instead, and it was just as good!

1/3 cup Pesto (any kind works…I’ve liked the Basil and The Sun-Dried Tomato Basil…experiment!)

**Once you’ve made these a few times, you won’t have to measure the ingredients.  I just put on what looks good so might go a littler over some of these portion sizes occasionally :)**

Then, starting with the short side (if you’re looking at the picture above you would start on the left or right side of the picture) carefully roll the pizza crust back up so it looks like the picture below.

Spray a 9-inch round baking pan with cooking spray.  Here comes the tricky part.  Take a serrated knife and cute the roll into eight separate piece.  This part can get a little messy so you have to be extra careful so the filling does not fall out of the crust.  The easiest way for me to do it is to cut one piece and then carefully place it in the baking pan, then cut another one, etc.  All eight should fit into the baking pan just right. 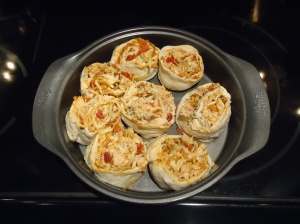 Bake for 20 minutes until tops of roll-ups are a golden brown.  Cool 5 minutes before serving. 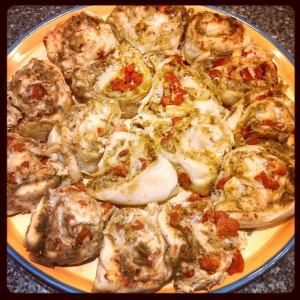 These roll-ups have been a hit every time and only take about 15 minutes to put together.  Give them a try for your next tailgate or for an easy meal you and the kids will both enjoy.

Now back to reading about basketball and Go Hawkeyes and Cyclones!!!!! 🙂