When people hear a phrase like this applied to food, many instantly get the misconception that it must be a hard dish to prepare.  By adding the word crusted to the name of a dish it makes it sound both intriguing and delicious, all while making the recipient of the meal feel as though they are delving into something that must have taken hours to prepare. Thus the reason I love being able to add this word to the title of a dish I have made 🙂

However, this couldn’t be further from the truth.  This fish entrée may be one the easiest meals I prepare, only taking about 10 minutes to throw together and another 12-15 minutes to bake.  To prove how easy this dish is to make, let me share with you the story of the last time I made it…just this past Monday night.

After a Sunday spent visiting Grandma and Grandpa (or Bompa and GaGa as T.J. calls them 🙂 ) in Humboldt, IA, I knew I wanted to make fish for supper on Monday.  We had, as we all should when visiting grandparents, overindulged a little too much the day before when we went out to eat with them.  I wanted something light for supper but, coming off a day of eating anything and everything we felt like, I wanted it to be tasty and satisfy our food cravings.  I opted for Pecan Crusted Tilapia with a side of veggies.

Even though we had just seen Mike’s parents the day before, we knew we would be seeing them on Tuesday again for sure.  They had a few appointments in town on Tuesday morning and then would be staying at our house that night so they could watch the Hawkeye vs Minnesota game (which I’d prefer not to talk about at this time).  They ended up deciding to come on Monday because there was an event Mike’s mom wanted to attend on Monday night.  They would be staying at Mike’s sister’s house, but we would still see them on Tuesday.

Late in the afternoon on Monday, we found out Mike’s dad wanted to stay at our house that night, as well, and would be coming down after T.J. woke up from his nap.  I already had tilapia thawing out for supper for Mike and myself and had planned on making T.J. grilled cheese and a hot dog (two of his favorite things) because he doesn’t like fish…hopefully someday *figers crossed*.  Knowing Mike’s dad may not be too thrilled with the idea of tilapia and vegetables, I decided I would make him a bowl of Progresso Baked Potato Soup and a grilled cheese with ham.

We wanted to eat around 6pm so around 5:30 I pulled myself from the living room where Bompa, T.J., and I had been playing with choo-choos and tractors and headed toward the kitchen.  Mike was finishing up his run on the treadmill.  I was able to coat the fish and have it in its baking dish within 10 minutes.  I waited until 5:45 and then put it in the oven.

At that point, Mike came upstairs and headed back to shower up for supper.  As the fish baked, I prepared Bompa’s soup, T.J. and Bompa’s sandwiches on the stove top, microwaved T.J.’s hotdog, and steamed our vegetables.  Mike came back in the kitchen with about 5 minutes to go and said, “Whoa, can I help with something?”  I had about five different things going…again, all while the fish baked.  I wish I would have taken a picture of the stove top and kitchen area 🙂  He corralled the boys into the kitchen, got T.J. prepped in his chair, and by that time everything was ready!

The fish was just right.  Mike said it best when he stated, “It feels like I’m eating dessert.”  The honey Dijon coated with breadcrumbs and pecans tasted sinful all while still being pretty healthy and low-calorie. Anytime Mike likes fish, I feel like the meal is a success.  He’s not a big fan, but I try to make him eat it once a week.

So, if you wanted to give this recipe a try and were worried about it being too hard, think again.  I made three different meals all while making this easy, no-fuss recipe.  If it had just been the fish and the veggies, I would have been sitting with my feet up while the fish baked and the veggies steamed.  Hope you enjoy it!

**This recipe makes enough to serve 4 people.  As usual, in my pictures there are only 2 servings, but I have written the recipe for 4.**

Smash pecans so they are in small crumbs.  I do this in a “very professional” *clearing throat* way.  So if you have a better way, like a food processor (which I dream of having) you can do that instead.  Here’s what I did:

Put pecans in a small ziplock bag.  Then I took my potato masher and took out all my aggression on the poor bag of pecans 🙂 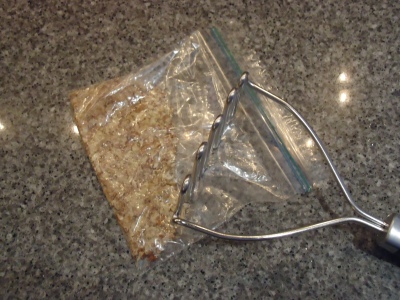 Line a baking dish with aluminum foil and spray with cooking spray.

Dip each filet in butter mixture so all sides are covered and then dredge all sides of fish in breadcrumb mixture until covered well.  Place in baking dish.

This meal is truly delicious.  I think this coating would be great on chicken, as well!

Dinner was a success for all four of us that night.  I celebrated by enjoying the season premiere of one of my favorite shows – Big Break which airs on the Golf Channel at 8pm CT on Monday nights…then I fell asleep 🙂