With another Saturday in the world of NCAA hoops rolling around and the Cyclones being the 1pm game played on ESPN, I knew I wanted to do something special for lunch.  This past Saturday would be the last weekend of regular season play before the Big 10 and Big 12 Conference Tournaments begin this week.

As most of you know, Mike and I live for college basketball.  I can count on one hand the number of Cyclone and Hawkeye Mens Basketball games both of us have missed this season.  It is what gets us through the long winter months and takes the place of golf when it’s too cold to be out on the fairways.

One of our favorite spreads to indulge in during basketball games includes a big plate of chicken nachos and buffalo chicken wings.  During the second half of this basketball season we’ve been doing a good job of staying away from this high calorie option and trying to go for foods that are a little better for us but still offer a great tailgate flavor.

This past weekend I opted for an old favorite – County Fair Inspired Sweet Potato Fries.  As usual, they were delicious and just what we were craving on a Saturday filled with good college basketball games.  For the other half of our spread, I thought I’d give something new a try.  Lately, I’ve been into substituting broccoli and cauliflower for certain ingredients in many of my recipes to make them a little healthier.  This Saturday, I thought I’d try substituting cauliflower for our traditional chicken wings.  From this was born Honey Sriracha Cauliflower Bites! This recipe was delicious and it was hard to believe we were eating cauliflower instead of real chicken wings.  I’m thinking this will definitely be a repeat meal during March Madness.

**This recipe makes enough to serve 4 people.  I have a little less than what the recipe calls for in my pictures since I was only cooking for two of us, but the recipe will make enough for 4.** 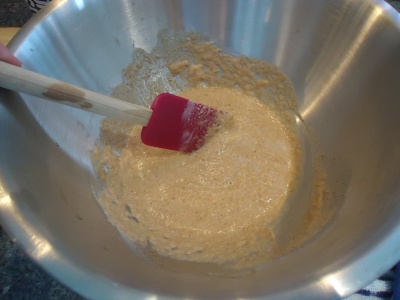 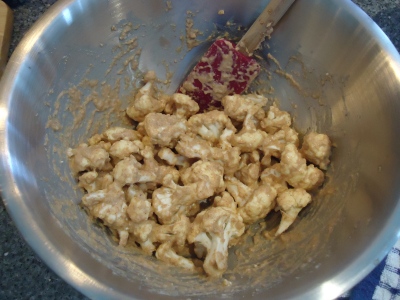 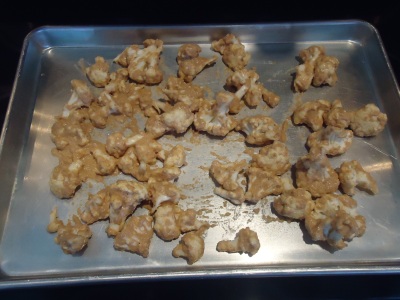 About 10 minutes before the cauliflower is done baking, begin making the glaze.  In a large skillet, combine honey, sriracha sauce, orange juice, garlic powder, and ginger.  Bring to a slight bowl and then reduce the heat to medium-low. 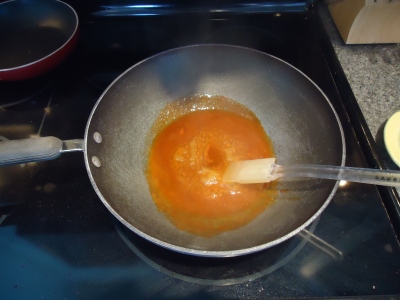 When cauliflower is done baking, add to glaze in skillet, stir to coat, and let cook for 3-4 minutes.

Serve with your favorite condiments, such as, ranch or blue cheese, just like you would with regular chicken wings! 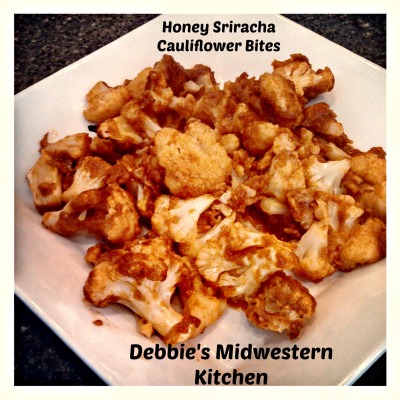 I love this healthier alternative to regular ‘ol chicken wings.  They were so good we didn’t even miss the real thing.

The Cyclones were able to pull off a good win that afternoon, but my Hawkeyes suffered a devastating defeat at home to Illinois to close out their regular season.  We’ve hit a slump in the last couple weeks…not a great time to hit a slump, but I’m hopeful that we’ll pull out of it in time to enter the Big 10 Tournament on Thursday against Northwestern and end the season strong.  Its tough being such a loyal fan sometimes, but no matter what, I love my Hawkeyes!!!