After what feels like the longest winter we have ever endured, spring finally made a brief appearance in northern Iowa this past weekend.  Saturday reached the upper 40s with hardly any wind (that feels like a 60 degree day at our windy country home) followed by two days in the 60s on Sunday and Monday.  After months of weather with temps below zero and snow-covered ground, this weather felt like heaven.  Not to mention we lost almost all our snow.  A welcome sight for most!

I love spring because it’s a time to emerge from hibernation and a chance to get outside and start doing all the things we love after spending too many months cooped-up indoors.  It’s a time to hit the fairways and to lace up my running shoes and start hitting the pavement again…two of my favorite things to do during the warmer months here in Iowa. Believe me, by the time next winter arrives, you’ll probably be tired of hearing about golf and running 🙂

Many winters I do actually get outside and run throughout the snow filled, bitterly cold months.  Last year Mike and I spent most of our winter running outside, training for The Country Music Marathon (covered in this recap) but this year I felt far from motivated to get outside and run in the cold and snow.  I still ran on my treadmill but placed a lot more of my focus on building strength and putting on muscle.  With no race on the calendar, this was something I could get away with and there was no reason to force myself to run outside.

Last week this all changed.  On Thursday, I finally signed up for my first race of 2014…The Dam to Dam Half Marathon in Des Moines, IA, on May 31st.  Now I had to get outside and run…no excuses.  I decided Saturday would be my first long run outside – 7 miles.  I’ve been running between 7-8 miles on my treadmill nearly every Saturday for the past several months, but there is something different about running outside.  Breathing in the cooler air, wind, hills, and hitting the pavement instead of a forgiving treadmill takes a little more of a toll on your body than you realize.  It can also make the run more demanding.

Mike decided to do the run with me…which made me even happier.  I love running with him because it passes the time quickly and its a nice way to start our day together.  So we packed up T.J. and headed across town to my mom’s where he would play while we went out for our run.  We started around 8:15 and it was a beautiful 32 degrees with the sun shining down on us.  This felt incredible after months and months of sub-zero temperatures.  We covered 7.06 miles in 60 minutes, and I felt like a new person after finally getting a run in outside! 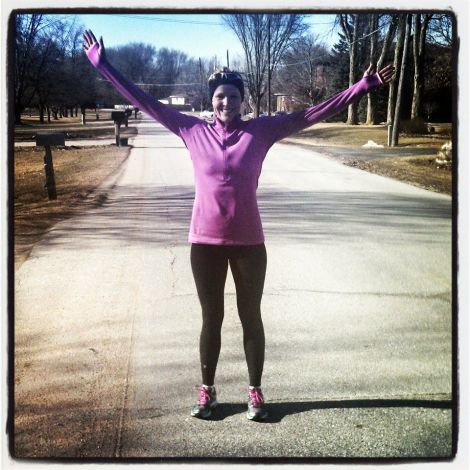 Sunday was even more beautiful and we spent most or our morning and afternoon outside playing and doing chores around the property that needed to be done after the long winter.  Monday was much the same with temperatures reaching the low 60s so Mike and I were able to get outside and do a 6 miler in the early evening.  I even wore capris and Mike had on shorts!  So exciting!

Before we headed out for our run, I prepared our supper and placed it in the refrigerator so all I had to do was pop it in the oven when we arrived home.  I wanted something light and healthy after a nice run but something that would keep us from waking up in the middle of the night starving after burning so many calories.  As I looked through our refrigerator earlier that day I spotted a jar of Basil Pesto Cream Sauce that needed to be used.  I’ve recently used this in several recipes, including: Creamy Basil Pesto Veggie Soup and Spinach & Artichoke Pizza.  I love the flavor and decided that, along with some asparagus, this would be a nice, spring-inspired meal to reward ourselves with after a nice run.  This is what led to Crispy Basil Pesto Chicken!  This recipe is a keeper and one I will definitely be serving again soon!  Not only is it delicious and healthy, but also easy!  Enjoy!

**This recipe makes enough to serve 4 people.  I made it for 2, as seen in the pictures, but have written the recipe for 4**

1 cup Corn Flakes, crushed (an easy way to do this is to put them in a ziplock bag and crush them into crumbs using your fingers)

Pour cream sauce into a shallow bowl and season to taste with salt and pepper.  Stir to combine.  Pour crushed Corn Flakes into a separate shallow bowl.

Then dredge breast in Corn Flakes so all sides are covered.  Place in baking dish and repeat with remaining chicken breasts.  I prepared these ahead of time so at this point I covered the dish and placed it in the refrigerator.  Something you could do the night before or in the morning before work. 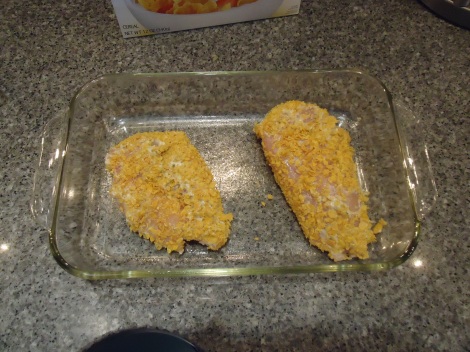 The random tenderloin is T.J.’s. He just wanted a plain chicken breast 🙂 He doesn’t know what he was missing!

Serve with your favorite side and enjoy!

I’m looking forward to many more runs over the next few months of my training and many more meals filled with the spring and summer flavors I love!!!